Issue 2 of Sector 13 contains a few hidden secrets.  References to comics we very much admire or TV shows from our youth.   Over the next few days we'll be revealing some of those secrets, but look out for them.

In this post Laurence McKenna reveals how the cover of a classic French Science Fiction Graphic Novel  provided the inspiration behind a single panel of the Sector 13 strip he and Simon McKnight produced for Issue 2.

As a science fiction fan group, Sector House 13 has a deep love of the classic comic writers and artists.  Personally no story captivates me more than the Metal Hurlant strip, Exterminator 17.  Written by Jean-Pierre Dionnet and drawn by Enki Bilal in 1975.  The writing style and art serve as precursors to all that is best in 2000AD.  In light of this and being given the great opportunity to craft a photo-strip for our latest fanzine, some of us decided it would be both fun and serve as our token appreciation for this seminal work to do a photo realistic frame based on an image from the story.

The bulk of the latest photo-strip exists within a riot situation in the ‘pressure cooker’ environment of Sector 13; sadly as with all riots, things escalate and people get hurt.

It seemed to us that the most visceral image from the Exterminator 17 story was the massively impactive cover (see the first image above) and we set about to craft a suitable counter-part to it.

Photo-strips (at least the ones we do in our fanzine), consist of multiple separate images blended into one final panel.  The idea began to coalesce when we were able to take a few posed photos of two of our cos-players at a local convention (see below). 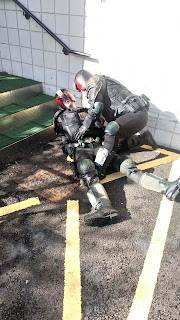 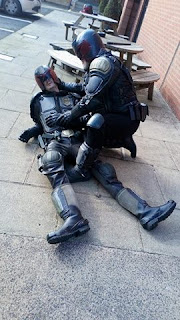 The image on the right hand side had a light, crispness about it and closely approximated the original Exterminator 17 image, we went with it. 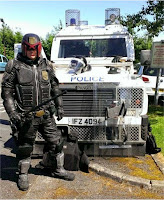 The next thing was to attempt to set the figures within a realistic riot background.  Belfast alas gives us abundant experience in this regard.  We were fortunate enough to have an archive photo of one of our cos-players posed before an armoured PSNI Land Rover and we used this as the basal background. 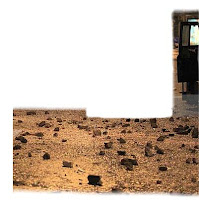 For the debris, rubble and other materials commensurate with any riot, we went to source and downloaded an online image of an actual Northern Ireland riot and using a free photo cropping app, cropped the image accordingly. You will see the photo is cropped in such a way as to remove all vegetation and present day street furniture (there is little green in Mega City One).

There followed the cutting out of smaller (but necessary components such as  better defined body armour, a leg and a screaming lower face (we didn’t want to lose Judge Knight one of our recurring characters, so we anonymised the injured Judge).

We now had all of the basic images necessary for a good frame, the glaring difficulty was the 23:50 story is time tagged and this particular scene was set at night.  We had to resort to Procreate add darkness layers to the image and then throw light on the figures and background to make it as realistic as possible.  The initial attempt fell below what we deemed a satisfactory frame, as you see the glow from various light reflecting surfaces is too diffuse and the shadowing is not properly realistic. 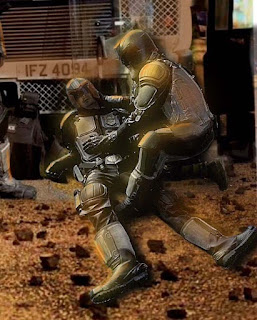 We used GIMP (a free photo-shop type program) to blend the colours of the image and then painted  on shadows and darkened areas to ground the image.  We then edited in wound and blood effects (the severed left leg); changed details on the Land Rover such as the registration to a Mega City One type.  Finally light reflections were added to the edges of the two Judges to help highlight and bring them forward.  We then had an image we thought was a fitting approximation of the Bilal original, tailored to fit within the context of our story. See the final result below.