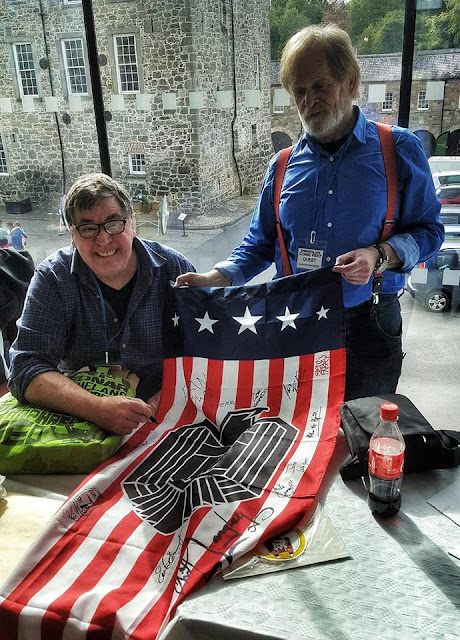 Laurence McKenna sums up the feeling of the Sector House 13 group on the death of Carlos Ezquerra in a piece taken from our Facebook page.

So we see the passing of a Titan of the World of Comicdom: The mighty Carlos Ezquerra.

Where to begin in attempting to encapsulate the incredibly creative life of this artist.


His career began in Spain where he worked on many Spanish titles. He then made the leap to British comics in the early 1970's working on various titles.

In 1974 he really came to the fore with his work on Battle Picture Weekly's 'The Ratpack' and following on from this to 'Major Easy'.

In 1977 Carlos set out and defined the character Judge Dredd for 2000AD and is seen as the main influence on this strip over forty years. The list is long: The Apocalypse War, Necropolis, Wilderlands, The Pit, Origins and Tour of Duty are amongst his standouts. 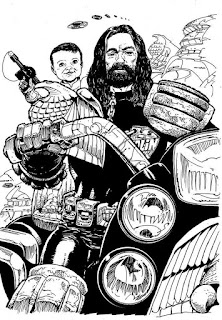 If this were not enough, in tandem with Dredd, Carlos set out the character Johnny Alpha and the harsh world of Strontium Dog. Firstly in the seminal publication StarLord and then in 2000AD.

Again the list of stories is almost limitless, but his work on 'Portrait of a Mutant' lives long in the readers memory.

I have set out but a fraction of Carlos Ezquerra's talent and it would require many more pages to give the reader the totality.

Many of our group members have met with Carlos, were charmed by his soft spoken, kindly demeanour and staggered by the works he personally crafted for them.

Personally, I grew up reading Carlos Ezquerra from a young age and his work was a constant in my life. It shaped me in a good way and in this there can be no greater accolade. 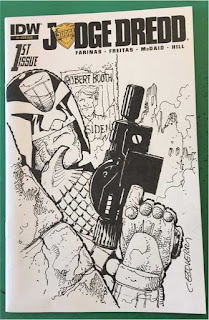 The photo at the top of this page shows Carlos and his life long co-creator John Wagner with our group's banner last year. I think you will all agree that this image serves as a warm and touching testament to what Carlos meant to us here at Sector House 13.

Other art comes from sketches and commissions Carlos produced for members of our group.  Always highly prized by the owners, even more so now.

It remains for us all to extend our condolences and good thoughts to all of the Ezquerra family.