Something of a first here.   Comic and Computer Game Blogger Chris McAuley shares a short story with Sector House 13, our first  piece of fiction on the blog.  Accompanying the story is an illustration from Roland Kalnins, artist on the excellent "Tales of the Fractured Mind" by Belfast's own 'Rowdy' Roddy McCance, that we've been looking forward to sharing with you. 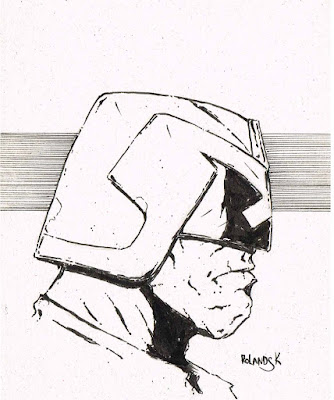 He reserved it for moments like this, when the helmet was taken off – its weight no longer present, his eyes not shaded by filters.  He permitted himself moments of reflection, something akin to melancholy – the loss and waste of innocence, of a childhood subverted, subdued and moulded by the Crud almighty Justice department.

Palantine wasn’t a clone, he was admitted into the academy after his father’s suicide and his mother’s gradual descent into madness.

The academy became a home, his tutors – mother and father and his fellow cadets the siblings of the ‘family’.  It was a cold place at times, the only affection that was spared were for those who could ‘cut-it’, the potential Judges of the future and even that was muted so as not to cause contention with other cadets.

They had all been put through rigorous regimes of training, one of his best friends, Jimmy Putz had been practising some fancy moves with his lawgiver, standard issue at the age of 9, he spun it round his finger and must have accidently used some pressure.  He blew his head off. Palantine had seen it all, only having been a few meters away, the sound of the high velocity bullet escaping the chamber ringing around his ears and a deep hollow sound seeming to bounce and reverberate around the mess hall. Rigorous and brutal, there were no hiding places to escape from the realities of the nature of fact that death was everywhere in Mega City One.

He excelled at History, learning about the skyrocketing crime rate, watching the vids show the sprawling population of what was once the America’s, listening to the narrator reassure him that the Judges were necessary, the new demarcation of what was Washington to New York becoming the first Mega City – his home.  Vestiges of the Old America survived, historical curios could sometimes be found at a price and T-Shirt’s with the Stars and Stripes had become a craze a few years back, until they were deemed illegal, an inescapable link with the ‘democracy movement’ and that kid whose very name echoed the old country, the singer and terrorist.

Snapping back to the present, his thumb ran across the spine of a book that he had just confiscated, ‘The Rights of Man’ by Thomas Paine.  Even the title was subversive, rights? citizens don’t have rights.  You can’t allow a mass population of potential criminals, violent offenders and democrats to believe that they had any rights other than those granted by the Justice Department. He flicked through it, passages like

“Men should not petition for rights, rather he should take them”

“Whatever is my right as a man is also the right of another: and it becomes my duty to guarantee as well as possess”

Dangerous ideas, he would take the evidence in tomorrow…

But for all his training and control of thought, a ghost haunted Palantine at the back of his mind, in that corner that still screamed that it was all so unfair, that child who suppressed his tears in a dormitory with walls painted grey, the colour of steel – to enforce that they weren’t mere human beings, they were Judges -in – training.  Was it worth it?  How much had they lost through this process?

But, as he placed his hand on his helmet, he repeated the oft – cited matra…

“I am not a man, I am a judge, I am not moved by compassion, only by truth, I have no other passion but for that of Justice”

And with that all his previous reflective thoughts melted away and Judge Palantine was again at peace.