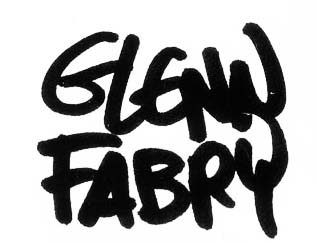 Issue two of the Sector 13 Fanzine contains the first part of an interview between Chris McAuley and Glenn Fabry.   Here Chris and Glenn continue their conversation.

It’s getting later and Glenn and I are now outside under shelter at the back of the bar, a series of tables and chairs are lined up and we take our place there, it still raining, but we are kept dry and the night air affords Glenn the gentle puff of a cigarette as he relaxes and begins to disclose more about his work and his life.

Chris:   I want to get into the mind of Glenn Fabry a little bit, what is the thought process when you look at a script with a detail of story -  how do you visualise it?  How does it come to life?

Glenn: What I want to do is tell a story, so I see it like – a silent movie.  So in silent movies, I’m talking about the ones before captions, you could tell what was happening by the way that people were reacting to each other.  That’s what I wanted for my drawings, that people could tell what was going on, without any lettering or anything like that, just to tell the entire story with my pictures.

Chris:  Do you regret that we are moving away from black and white strips, perhaps losing some of the clarity that we would have seen with your depiction of Slaine?

Glenn: The piece of work I had showed you earlier, the Misty/Scream cover, it’s mostly greyscale, so you can get softer tones and it’s much quicker to do rather than the black and white style.  Also in the days of the black and white comics, you could only do them with specific boards and art materials, which are impossible to get nowadays, they are too old, no one is making them.

Chris:  So it’s more the computer aided colour process that is used now?

Glenn: I personally don’t use a computer for my artwork, so if I do my stuff in shades, the colourer has a general idea before they use the computer to start the process of colouring. If I had time to learn how to use a computer – I would, but fortunately I’m still incredibly busy with my artwork, so many people are looking for me to do stuff.
I can also paint as well

Chris:  Was that something that you learned at school? Do you do an art class at school and learn those basic techniques?

Glenn:  No, I taught myself how to do Watercolour, I then had the opportunity to go to art college, I thought that going to art college was going to be like going to Hogwarts – where they teach you everything.  But, no, they didn’t.  When I showed my portfolio to the head of year, he exclaimed “This stuff is stupid, don’t you realise that the camera, has killed off any need for representation in artwork!”  So a lot of the stuff that I had to learn, in order to do the comic stuff that I wanted to do, I had to learn from the library in the college – The teach yourself how to paint style books.

You know that an artist gets paid roughly about a third more than the writer in comics gets paid.  But for the writer, it will sometimes, take them significantly less time to write the page compared to the artist illustrating the story on the page.  So the writer can write between ten and twenty pages a day.

Anyway to illustrate the difference between the role of the writer and the artist, I got this page through from someone who told me “Right, what we need is a hillside, it's got 57,000 Vikings riding motorcycles and they are riding close to the edge of a cliff.  They are all holding severed heads of wolves in their hands as they come towards a burning village below” that’s all the description that I would get from the writer.
I had to draw that fucker and it took me three weeks

Chris:  Does it come gradually? Do you get a flash of an image coming into your head? Do you get a sense of a scene like that before you draw it?

Glenn: Chris, it’s just like reading, you read something and an image comes into your head.  That’s how it is for me.  Generally the first image that you have in your head, that’s the one that I gravitate towards.  Now, for covers, someone else has to look at the image – the thing that you have just thought of and they generally can say “No I don’t like that, let’s change it” 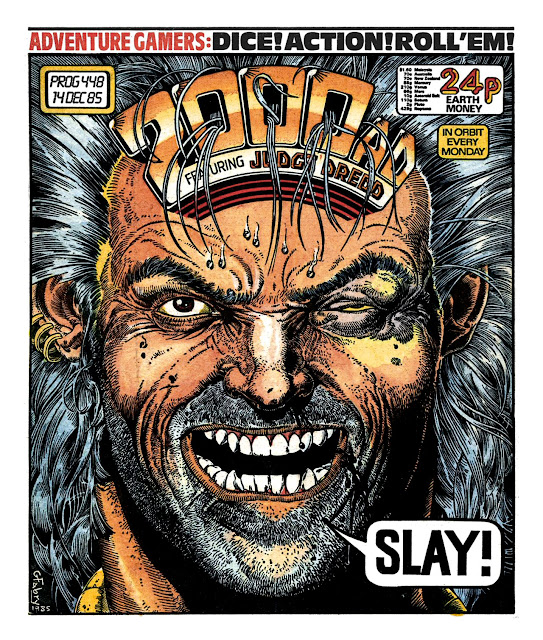 Chris:  I suppose the cover is very much a part of the design of marketing the comic book issue.  I have noticed that a lot of your covers seem to be almost always a headshot.

Glenn:  That’s because I got typecast, because I’m quite good at doing faces – so I would just do a big massive fucking head – there you go! And also the other thing about making comic books noticeable – especially in a comic book shop when all the comics are up on the racks is to try and draw the most striking image, an image that will draw the potential buyer to it.

Back when I first started to do covers, it was something like … The Avengers, or somebody and I had to draw 53 people fighting each other and if you stand back a few feet each of the characters look indistinguishable. It’s a blur on the cover.  But if you have a big head then that will stand out as a clear, striking image and people will go for that one.

Chris:  I remember the Slaine one..

Chris: I remember that….and obviously The Preacher cover which is now everywhere and iconic.

Chris: You’ve had an association with Garth Ennis.

Glenn: Yeah, the first time I ever encountered his stuff, it was illustrated by John McCrea, pretty sure it was in the Crisis magazine…it’s almost too far back for me to remember.  What I do remember is reading through it and thinking “Hold on, there’s something going on here!” not just from the storyline, but the fact that he could really put a story together.

Chris:  That was my introduction to Garth and I’ve reached his Crossed series

And on that note, we will bring this part of the interview to a close.  Watch out for part three on this blog very soon..  Part One, along with some exclusive Fabry art, can be found in Sector 13 Issue two, available for £6.50 postage paid (UK only).  Payment via Paypal to Sector13@boxofrainmag.co.uk.  For other destinations contact us on the same address for full details

Sector 13 is a non-profit fanzine, produced by fans for fans.