Here at the Sector House 13 Blog we're always keen to promote comics that our members and friends are involved with.  On checking the Kickstarter web-site today I quickly found three campaigns that involve good friends of the group. 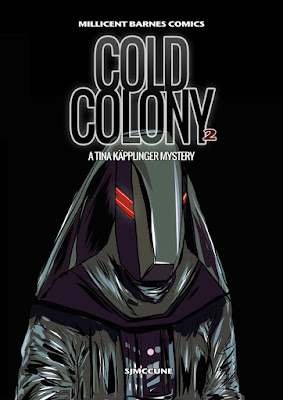 Firstly we have a collection of two stories by one of the most talented writer/artists on the self-publishing scene.  Stuart John McCune produces comics which are elegant, deep and totally satisfying to read.  His books have layers of meaning and complexity that reward careful examination and allows them to be read over and over.  His Human Beings ongoing title has just reached its fifth issue and a collection is, thankfully, available for those who have missed it.

But Stuart also has a new Kickstarter, for the first of what will, I hope be an ongojng series of books long out of print.   This time he's looking back at a one-off comic from a few years ago, Cold Colony, combined with a brand new sequel, Cold Colony 2.

The first book, an atmospheric science fiction mystery, which Stuart describes (completely accurately) as having a touch of the EC's to it, is a fantastic read.  The claustrphobia of life in a harsh deadly environment is captured superbly in Stuart's stylish and graceful artwork.  His hero, Tina Käpplinger is enigmatic and his story has the same grit and depth of the very best scifi movies of the eighties.

This was one of the books which cemented my interest in self-published comics, if there were things as good as this out there, what else did I need?

Stuart says the second story has a similar feel, but is more in tune with his recent, more sophisticated (my word) work on Human Beings.   Certainly the art samples I have seen look very special and personally I can hardly wait to read Cold Colony 2.  I just love that Space Ship design!

Available in print and pdf format and with some great extras you can find the Kickstarter Campaign here and can check out Stuart's other comics on Big Cartel Here.  Stuart's comics blew me away when I first started reading them a few years back.   If anything I think they are getting better and better.

Twilight Hotel is a horror comic series based on a screen-play by writer Ra-X.  Described as a love letter to "The Twilight Zone" and "Tales from the Crypt" this collection of blood-soaked morality tales is aimed at the hard-core horror fan.

Set in a Hotel, the stories in issue one, the only one I've had a chance to read, are set in and around the hotel at various times in its history.  They begin with an introduction to our host, a chain-smoking maintenance man with a good head for a story.

More importantly from a Sector 13 perspective is the array of great cover artists the team have lined up.  Our very good friend, Ryan Brown has supplied a fantastic cover and some horrific prints to the impressive array of add-ons available to pledgers.

While the artist on the Nemesis the Warlock pin-up from issue two of Sector 13, Adam Brown, has an original oil painting up for grabs as well as supplying a cover to one issue of the series..

This is a well put together Kickstarter, the comics look highly impressive and the array of talent involved is excellent.

With pledges available from $3.00 (if you can get the last of the limited early-bird options) to  $4,000 there is something for every horror fan.  The ability to buy anything from a single issue to a slip-cased collection of all four books in the series is a nice touch, so go along and have a look and support our friends Ryan and Adam.

The final project we want to look at is so new it has not even made it to Kickstarter yet.   Beyond Doomsday is a Science Fiction, Horror and fantasy comic which owes a huge amount to the Warren comics of yesteryear, particularly the more 'adult' sci-fi of 1984 (later 1994 magazine)  and the early days of Heavy Metal magazine.

There have been two Asylum Press issues, both dated 2016, and both with all of the stories written by Frank Forte and  concentrating on post-apocalyptic tales.

Art is from a wide variety of artists each of whom has a very different style and all of the stories are well told and look pretty damn good.

For myself I was most taken with Silvester Song's work on "The Transaction" in the first issue and with Frank Forte's own art on "Battlefield X" in the same edition.

Indeed I was slightly disappointed that Frank had not illustrated any of his own stories in the second issue and I wasn't hugely impressed at, Swamp Girl, one of the stories in issue 2.

But a hit rate of seven out of eight is pretty good for any anthology title and I think it shows that Frank's forte (do you see what I did there*) is, perhaps, sci-fi rather than fantasy.

It's interesting to see comics today which have something of the slightly irreverent feel of the Warren titles.  They were the magazines that any self-respecting adolescent boy hid away from his parents and there's a wee touch of that here too.

I'd read both issues as they came out, and really enjoyed them but the reason they came to our attention at Sector House 13 now, is that, once again, our very good friend Ryan Brown has been sought out as the cover artist for a trade paperback collection of both issues to be solicited via Kickstarter in May this year.

We'll keep an eye out and let you know when the Kickstarter becomes available.  Ryan's cover is fantastic and I'm sure we have a few guys reading this who will be interested.

Just a final word on our own zine Sector 13.  More completed artwork in for the tyhird issue and it just keeps getting better and better.    Some previews of that and other projects coming to fruition in May later in the week I think.

To keep fully up to date follow the Fanzine's Facebook page or even better join the Sector House 13 group.


* Huge apologies to Frank for that, i'm sure he has seen it thousands of times but I just couldn't resist.