For our latest Post, 2000 AD neophyte and regular Game Blogger, Chris McAuley, takes a look at the Rebellion game 'Dredd v Death' from2003 and finds much to like in imagining himself as an almost invincible, grim and violent super-cop from a Police State of the future.  I'm saying nothing.


So... I'm currently making my way through “The Case Files of Judge Dredd” and I'm loving the early story material - I think my favourite so far is the Robot Wars - but I haven't quite got to the iconic introduction of Judge Death by Wagner and Bolland from Prog 149-151.   As a result I’m a little hazy on the back story for the Dredd vs Death Computer game, so forgive me if I demonstrate my lack of knowledge in this brief review of the Dredd v Death game..

My copy came from ‘Good Old Games’ – they offer classic games re-engineered to work on modern PC systems – but you can still grab this game on the PS2 and XBOX,   Its a game I took a chance on...And I'm glad I did!

The graphics are a little clunky, but the experience is fairly close to what I could imagine being Judge Dredd would be like - you know, without the trauma induced by the Justice Department, arresting my brother, never being able to take my helmet off, that kind of thing.

You are introduced to the game mechanics in the Hall of Justice through a fairly bland tutorial - but it quickly becomes clear that this isn't just a Call of Duty type shoot-em-up. You have an arrest procedure including a button to threaten or warn the perp and, if they happen to surrender, a button to arrest them.

To complement this (and to bring a form of morality into the gameplay) you have a Justice Meter - if you do some irresponsible un-Dredd like things - like kill a civilian, the SJS (Special Judicial Squad) come after you - effectively ending your level and resulting in you having to fend off wave after wave of crack Justice troops until you eventually die.

In the first level you begin with Chief Judge Hershey ordering you to break up a protest by citizens wanting to return to a democratic form of government. You then deploy with a group of judges and attempt to arrest the protesters.  I shot on the ground beside them resulting in them immediately dropping to their knees with their hands on their heads and allowing me an easy arrest.  As I did so a popup appeared giving their names, place of residence and their conviction - a lovely touch - especially with the Dredd quip "Justice comes at a price - that price is Freedom!".

Then the Vampires appear.  They start to tear chunks of flesh from the nearby citizens and there's no reasoning with these mindless beasts.  It’s a simple case of shooting them until they die and, given that they are vampires, then shooting them again until they die properly!  My tip is stick to the Armour Piercing bullets.

The plot then progresses to the Dark Judges being released and your task is to capture them with the help of other judges like Anderson etc.

You start the game with the iconic Lawgiver Mk 3, this gives you a choice of bullets, standard, heat seeking, incendiary, Armour Piercing and Ricochet.

This is the most versatile weapon in any computer game I have played and again very true to the Franchise (which I know I seem very shocked by, but it is seemingly very difficult for development companies to get right) and a really neat factor is that as you select a different ammunition type a male robotic voice announces what you have chosen in order to dispense justice to unrepentant perps.

You can pick up alternative weapons, such as a shotgun, machine gun and if you press alternative fire, Dredd will Smack the perp in the jaw. I love ending a fight with some git by smacking them square in the gob knocking them out cold, but maybe that’s just me.
The Game also has the trademark Dredd dark humour intact, the Fatties, with those little wheels on their bellies, trundle about, there are adverts for Grott Pot -" with a snack this delirious who need nutrition?" 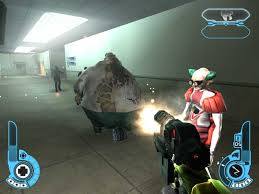 There's a lot of bang for your buck with single player arcade maps and unlockable 2000AD characters and then there is the multiplayer option which I haven't delved too deeply into, yet.

"Judge Dredd: Dredd vs Death" is still available from Steam and other on-line outlets for about £5.59.
at September 22, 2017